Home > Research and Benefits > Education ADHD
Research and Benefits
Print Share this Send
And so now the need for some alternative is growing more and more. Transcendental Meditation provides an opportunity for these students to experience that quietness, to expand their own awareness, to bring on the pre-frontal cortex, so that they can use the most of their brain.

Improvement of ADHD : the "Quiet Time at School" Conference

Dr Serena Grosswald presents research that found that Attention Deficit Hyperactivity Disorder (ADHD) improved markedly with TM. This is a clip from the "Quiet Time at School Conference".

John Hagelin : She was project director for a breakthrough two year study, on the effects of Transcendental Meditation on ADHD and other learning disorders, please welcome Dr Serena Grosswald.

Dr Serena Grosswald : It’s really a pleasure to be here in a room full of educators. Who are really dedicating their lives to try to improve the lives of children and their education. It’s a very tough act to follow after seeing these students; they are representation of what happens with Transcendental Meditation.

I want to talk to you a little bit about the research we’ve been doing, and what we see with children with ADHD. As was mentioned in the figure, over 4 million children haven’t diagnosed or diagnosed sometimes during their lives between the ages of 4 and 17 years with ADHD. And among these, over half of them take are on medication. And these are very powerful drugs, these medications. And of those, 60% continue on to these drugs until adulthood.

ADHD is among one of the most prevalent chronic disorder of childhood, so this becomes pervasive. The medication that is given for ADHD, is primarily amphetamines. So we give our kids “speed”. And the side-effects of these drugs are significant.

In this is three or four years that I’ve been talking about this, is now become recognized, how serious the side-effects of this drugs are, so that now the FDA requires “black Box warnings” on this medications. Some of the side-effect include potential cardiac event.

This really changed my perception of ADHD. I began to understand the degree to which stress is an underlying fact of this disorder.
2’20 … ? These children …??

Because many of them have learning disorders. But stress is not just what we see in terms of right there the experience in school,  they’ve got a test, that sort of thing, but stress all the way back to early childhood and their circumstances at home, whatever happens to be. And children don’t have a means of coping with their own stress. They don’t have a way of managing their stress.

What we found is that these children were able to settle down, and not only that, they were experiencing the silence of their own mind for the first time. What we found was that that ability to settle down, and to relax and to throw our stress, led to a cascade of other benefits. That these kids were able to focus better, they had better memory, had better organisation skills, better ability to control their own anger, to initiate tasks on their own. Their cognitive functioning was better.

See the next slide, EEG functioning also better, the executive functions as I mentioned. (The next slide)

We also did assessment of their cognitive performance. With standard cognitive test that were use and we found was an increase, almost 20% increase in their executive functioning, in their expressive attention, and problem solving abilities.

And all we did was have these children practicing TM ten minutes twice a day.
We did no other intervention.

And all we did was have these children practicing TM ten minutes twice a day.
We did no other intervention.

We follow that up the next year, in another school, a school that was featured in the PBS feature (Pharmaceutical Benefits Scheme (PBS) or Public Broadcasting Service ?). And this time we did a controlled study where children that learned and children that didn’t initially learned. And what we saw (considering next slide) It has been described about the effects on the brain.

You can see on the top is the control group, the group that learned TM three month later, and the bottom group, this is the amount of increase brain functioning, and this is with the eyes open.

These students meditating for three month (this is the amount of increase brain functioning) before they learned TM, and three month later, while doing a complex task. 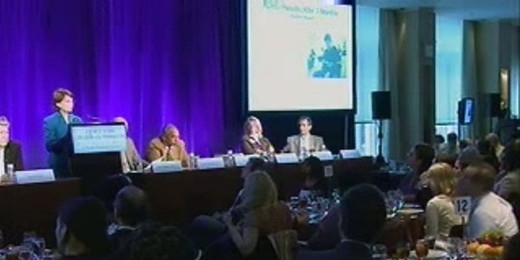 This is measure of the attention and focus ban waves of the EEG that showed that the bottom line is the group that’s been practicing TM. The very top line is the control group. You can see the difference that is there within three month (which is the central point there) improves attention and focus and then at six month (that final point there) attention and focus, theta/beta ratio, moved into the normal range. Again, just ten minutes twice a day practicing the Transcendental Meditation technique. So as I mentioned over the last several years, their has been increase concern about the side effects of the drug. And in fact just recently the last few weeks in Britain, the British Medical Society has indicated that drugs for ADHD should be the last resort.

And so now the need for some alternative is growing more and more. Transcendental Meditation provides an opportunity for these students to experience that quietness, to expand their own awareness, to bring on the pre-frontal cortex, so that they can use the most of their brain. So just, not only is this effective for students under stress but students who have problems with their attention and focus, and with managing their own behaviour. So thank you very much, and I hope you’ll consider this for your schools.

John Hagelin : What an incredible thing to have made this session so simple approach between ADHD and prevent stress related learning disorders. It’s very inspiring to hear this research, and I hope it would bring a huge amount of hope to millions of parents.

'The effect was much greater than we expected,' lead researcher Sarina J. Grosswald, a cognitive learning specialist in Arlington, Virginia, said in a written statement. 'The children also showed improvements in attention, working memory, organization, and behavior regulation,' she added.