He takes the stage to explain how Transcendental Meditation can be used as a tool for health, stress reduction and education. He details how meditation draws attention to "the source of thought" and helps one find a sense of unity within, explaining how physiological rest diffuses deep-seated tension and lowers blood pressure, which reduces one's risk for heart disease. He also explains how meditation improves integrated brain function, called EEG Coherence, noting that stress shuts down the brain in a way that is incompatible with learning. He notes that many schools are using meditation to help its students, and that it is also helps in reducing post-traumatic stress symptoms in veterans. He details how an overstimulation of the "fear center" of the brain leads to a perpetual state of "flight or fight," adding that females' experiences with war are frequently exacerbated by sexual trauma. In a clip, various women and girls from around the world describe their harrowing experiences in a war-torn zone, explaining how meditation eased their anxiety. 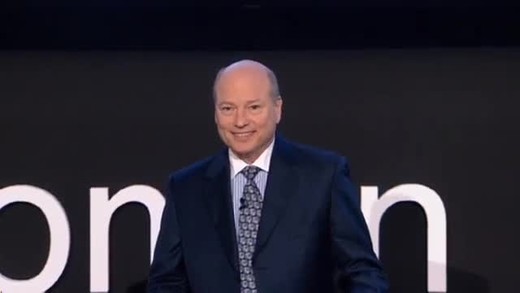 We're going to talk about meditation as a powerful tool for health, for education, and for post-traumatic stress.  So alright, what is meditation actually?

Developments in modern science have shed interesting new light on the significance and meaning of this ancient practice.

Modern physics reveals, and it's really very simple, that nature is structured in layers of creation, from fundamentally unified to superficially diversified, from unity to diversity. 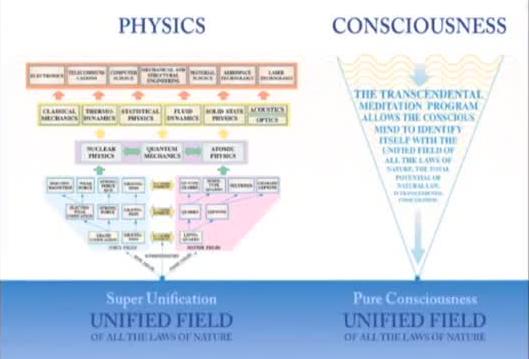 This starts at the surface level of day-to-day experience with the classical world, the sensory world or common experience, to the deeper quantum-mechanical world of atoms and molecules, and deeper still, the world of fundamental particles and forces, and, finally, to the discovery of the Unified Field.  Discovering the fundamental unity at the basis of the surface complexity and diversity of the universe.

Now, from this modern perspective, meditation classically understood and properly practiced is a technique to take our outwardly directed attention powerfully within to experience deeper and deeper levels of thought, quieter and quieter levels of the thinking process, transcending thought altogether, going beyond cognitive processing to experience, pure consciousness, to experience the fundamental unity at the basis of mind and matter. 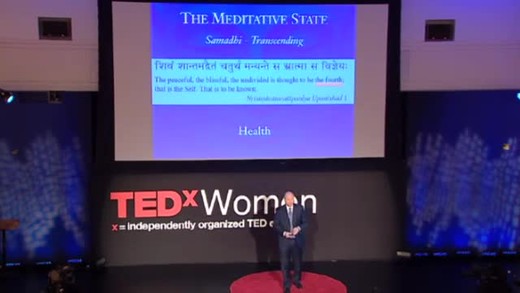 This fourth state of consciousness, traditionally called Samadhi, or the meditative state, or transcending, is now understood scientifically to be a fourth major state of consciousness, distinct from waking, dreaming, or deep sleep.  It has profound medical applications, firstly, because it is a state a profound physiological rest, deeper than sleep, and due to that because it is so effective at diffusing, to dissolving, deep-seated stress, more effective than relaxation or even with conventionally called 'meditation'.

And this is a major study just published last week by the American Heart Association's journal Circulation (a nine year longitudinal study funded by the National Institutes of Health) and probably the most significant research ever done in the world of mind/body medicine - extremely compelling.

And it's not just heart disease, but most diseas is caused or complicated by stress. It is not surprising that two Blue Cross Blue Shield reports marked reductions in every category of disease except childhood - which is arguably not a disease - childbirth- meditators were mysteriously having as many babies as the non-meditating subjects.

And also the deep rejuvenating rested meditations very helpful for aging. Aging is driven in good measure by fatigue and by stress. And just by exposing the nervous system to very deep rest, regularly twice a day, the biological age, the age we appear, the age of our body and heart and organs, is typically 12 to 15 years younger those people who have more stress and who aren't meditating.

The main focus today however is meditation's impact on the brain and brain development.

As we saw, meditation draws the awareness systematically within and each of these quieter levels of mind has a correspondingly completely different style brain functionning. 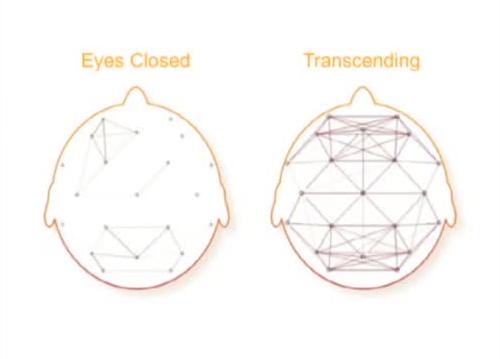 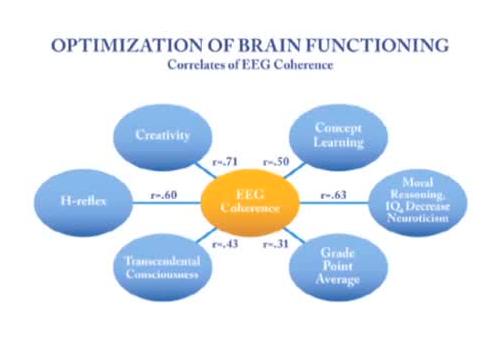 Going beyond all cognitive processing to experience the transcendent self has a completely different style of functioning in the brain, characterized by profound what's called “EEG coherence” or the integrated functioning of the entire brain, where the whole brain functions in concert.

And as an educator what's really fascinating and important is orderly brain function can be systematically developed in any human being at any age, and with it, increasing intelligence and so forth. Amazing educational tool!

But let's talk for just a moment about stress and its impact on learning.

Stress shuts down the prefrontal cortex (or higher brain) and it shunts that blood to the primitive brain (or reactive brain) and puts the brain into what's called a “fight or flight response”. It is incompatible with learning.

What's remarkable is, while this stress leads to stress-related learning disorders and stress related behaviors, not just in school but throughout society, the marked reduction in those stress-related learning disorders like ADHD for example, and how rapidly they can be normalized and how quickly brain functioning can be restored to a balanced state through meditation is really striking news.

And really as a result of that type of result in the last couple years, hundreds and hundreds of schools, public schools, in the United States and Latin America, and throughout the world are incorporating transcending, meditation, into the school curriculum.

The last few years it's over a million students are involved in this school programs. 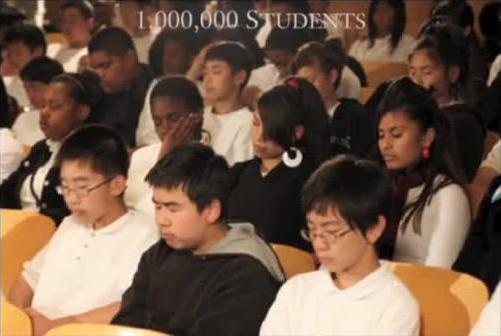 Alright, but what about the most acute stress?

We really are living in an epidemic of post-traumatic stress, we have half a million returning veterans with PTSD, and more soldiers die from stress and PTSD related suicides, than die in combat.

And conventional treatments are not only very expensive but they really questionable in terms of their effectiveness.

PTSD results from the chronic excitation of what's called the amygdala, or fear center, which tips the brain into a constant state a “fight or flight”, a constant state of heightened fear where everybody and everything is perceived as a threat.

Meditation calms the amygdala more effectively than anything that has been tested so far and restores balanced brain functionning.

And the results of this on PTSD are finally giving leading to significant support for the DoD - the veterans administration - for programs within the military the incorporation into military training to inoculate our troops against the ravages a war stress, and even more so today in foreign militaries all over the world.


And traumatic stress of course is no longer confined to the military, it really is increasingly pervasive throughout society.

Particularly women are victimized and endure terrible hardships and injury and insult in war-torn areas throughout the world as we know.

Millions of women and girls are victimized by prostitution, involved in the multibillion-dollar sex trade. In our own homes, about every second or two a woman is assaulted.  And we all know the problems.

And fortunately today, there are so many good organizations that are working to bring the healing effect of meditation to millions of women and children and others throughout the world - very, very happy to work with all of these wonderful groups.

And take a glimpse at some of these programs:

MEDITATION FOR WOMEN AND GIRLS WITH PTSD

"A year ago this month I was suicidal. I felt so low that I just wanted to not be here."

“My mom, she got deported 2 years ago. Sometimes I cry, because it's, it's just too much tension.”

“The number of women and girls who are raped and tortured and killed in war torn areas around the globe is literally beyond comprehension.” - Soledad O’Brien

African Refugee: "My in-laws turned against me. They tortured me, almost killed me."

"The initial research on the effects of Transcendental Meditation in treating PTSD offers so much hope, better than many things being tried, at far less a cost."

"I had a lot of problems in my life, and TM came into my life and gave me, like, this open door to something that I never knew I would be."

African Refugee: "Those days I used to cry too much, but now even the tears, they are holding. I'm great.”

So medically, scientifically, the most powerful antidote to stress and the key to optimal brain functioning is to transcend.
Thank you.

Origin of this meditation technique

How The Beatles Changed The World Spiritually (Pictures and video)

Being source of thoughts fulfilment and unfoldment of full mental potential

Economy is the display of consciousness