Home > The Beatles' and Celebrities' Meditation > The Beatles > The Beatles Anthology > Dear Prudence, Bungalow Bill (p284)
The Beatles' and Celebrities' Meditation
Print Share this Send
We came home because we missed the children. I wouldn't want anyone to think we didn't like it there. I said it was like Butlins holiday camp, we had learnt by then that you could say anything and they’d print it. It was a good experience - it just didn't last as long for me as it did for them. - RINGO
External Links PAUL: Mike Love was in Rishikesh. Donovan was there. I can remember people like that. Mia Farrow was there, and her sister, Prudence. John wrote the song 'Dear Prudence' for her because she had a panic attack and couldn't come out of her chalet.

RINGO: Prudence meditated and hibernated. We saw her twice in the two weeks I was there. Everyone would be banging on the door: 'Are you still alive?'

JOHN: No one was to know that sooner or later she was to go completely berserk under the care of Maharishi Mahesh Yogi. All the people around her were very worried about the girl because she was going insane. So we sang to her.7"

They selected me and George to try and bring her out because she would trust us. She went completely mental. If she'd been in the West they would have put her away. We got her out of the house. She'd been locked in for three weeks and wouldn't come out, trying to reach God quicker than anybody else. That was the competition in Maharishi's camp: who was going to get cosmic first. (What I didn't know was I was already cosmic.)80

PAUL: I wrote a couple of little things while I was there. I had a song called 'I Will', but 1 didn't have any words for it. And I wrote a bit of 'Ob-La-Di, Ob-La-Da'. We went to a cinema show in a village where a guy put up a mobile screen and all the villagers came along and loved it. I remember walking down a little jungle path with my guitar to get to the village from the camp. I was playing: 'Desmond has a barrow in the market place...'

JOHN: ‘The Continuing Story Of Bungalow Bill' was written about a guy who took a short break to go shoot a few poor tigers, and then came back to commune with God. There used to be a character called Jungle Jim, and I combined him with Buffalo Bill. It's a sort of teenage social-comment song and a bit of a joke.80

It was understandable; he was a very British lad. There were curries and spicy food and he has a stomach that gets upset easily (probably due to the peritonitis when he was a kid) Maureen didn’t like the flies - if there was one fly in the room, she would know exactly where it was at any given time. I remember her once being trapped in a room because there was a fly over the door. So obviously conditions in Rishikesh were not ideal for them.

RINGO: It's all a bit hard to remember now. I was only there for two weeks, then I left. I wasn't getting what I thought I would out of it.

The food was impossible for me because I'm allergic to so many different things. I took two suitcases with me, one of clothes and the other full of Heinz beans (there's a plug for you). Then one morning, the two guys who were dealing with the food said, 'Would you like some eggs? And I said, 'Oh yeah, sure,' and the next morning they said it again. I thought, 'Oh yeah, great - things are looking up.'

Then I saw them burying the shells. That was the first of several incidents that made me think that it was not what I thought it would be. You weren't supposed to have eggs inside this religious and spiritual ashram. I thought: 'What do you mean, you're burying the shells? Can’t God see that too?'

We came home because we missed the children. I wouldn't want anyone to think we didn't like it there. I said it was like Butlins holiday camp, we had learnt by then that you could say anything and they’d print it. It was a good experience - it just didn't last as long for me as it did for them. 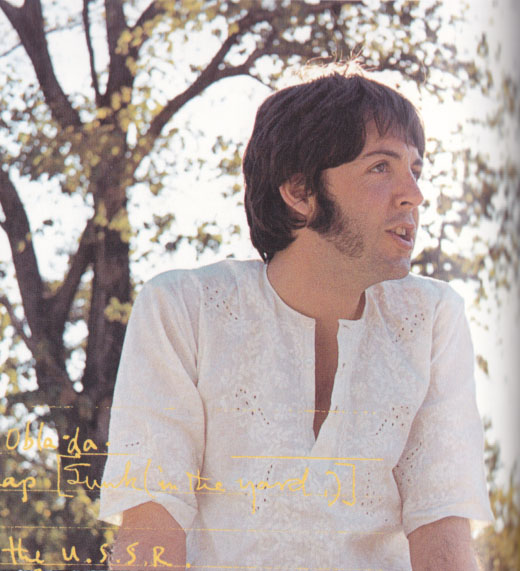 PAUL: Being fairly practical, I had set a period for staying in Rishikesh. To start with I thought, 'Whoa, this could be it, man. I could never come back if this works.' Then I thought, ‘Wait a minute, I'll go for a month. Even if it's incredible I’ll still come back after a month.' If it had turned out to be something we really had to go back for, I would have gone back. But at the end of my month I was quite happy to leave. Nobody got any blinding enlightenment. I thought: 'This will do me. If I want to get into it heavily, I can do it anywhere.' That's one of the nice things about meditation - you don't have to go to church to do it.

By saying I was only going to be there a month, I had to risk that the others would say that I wasn't into it. And George did; he was quite strict. I remember talking about the next album and he would say: We're not here to talk music - we're here to meditate.' Oh yeah, all right Georgie Boy. Calm down, man. Sense of humour needed here, you know. In fact, I loved it there.

In fact, I loved it there